November 12, 2020 - St. Martin I, Pope & Martyr
Semidouble Feast
Francis-Bergoglio Exposed: He Has Been Using Marxist Tactics to Undermine Doctrine
Just as the Vatican II Anti-council Did to Destroy the Mass and Sacraments in Newchurch
From: The TRADITIO Fathers
Francis-Bergoglio Blesses Lesbian
Francis-Bergoglio Blesses an Open Lesbian
Even the Wall Street Journal Has Noticed
That Bergoglio Is Destroying "Catholic" Doctrine
Not Directly, but by Innuendo, Interviews, and Films
To Sow Confusion among Newchurchers
And Destabilize Doctrine
To the Point that Anything Goes
Including Sodomy and Paedophilia 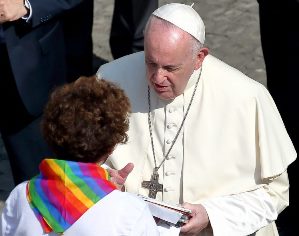 On November 7, 2020, even the Wall Street Journal took note that the Marxist/Modernist Francis-Bergoglio has deviously been using Marxist tactics to destroy Catholic doctrine, the same tactics that the Vatican II Anti-council used between 1962 and 1965 to destroy the Mass, the Sacraments, Catholic doctrine, and Catholic morality. And indeed all these have been destroyed in the Newchurch of the New Order, founded by that Anti-council in 1964, which is most certainly not the Catholic Church.

The Journal uses as an example Bergoglio's recent undermining of God's Natural Law by tolerating sodomite "civil unions." He does this not forthrightly -- as then even the Neocons would have to declare him a heretic -- but by innuendo, interviews, and biographical films. It is all a Marxist ploy on is part. Basically, it allows Newchurchers to believe as "Catholic" anything they want. In 2016 Bergoglio already undermined Catholic teaching on artificial contraception by off-hand remarks.

True Catholics, Francis-Bergoglio started off his undermining of God's Natural Law, which binds not only Catholics, but everyone, by declaring on the subject of sodomy, "Who am I to judge?" Is it any wonder the sodomitic paedophilia continues to run rampant in Bergoglio's Newchurch while Bergoglio lets them off scot free, while the children's lives are ruined? It is hard to think of anything more anti-Catholic and more vile.
Top
Post Reply
1 post • Page 1 of 1